I don’t know if this is going to become some sort of tradition for us, but as a matter of fact, we attended all Easter parties since the creation of our group. This year was no exception, and we had a really great time at Revision.

Revision is the kind of party that is just big enough so even though at some point you think “Ok, I’ve met pretty much every one I wanted”, when you get home you realize how many people you wanted to meet and did not. It’s also the kind of party that is so massively awesome that when you get back to your normal life, you experience some sort of post-party depression, on top of the exhaustion, and you have to get prepared for when it strikes. So we’ve been there, and this year we presented the result of the last months of work in the PC 64k competition. The discussion of the concept started back in May 2011, and we seriously started working on it maybe around August.

While Revision was approaching, rumors were getting stronger about who would enter the competition, how serious they were about it, and how likely they’d finish in time. It became very clear that the competition was going to be very interesting, but even though, it completely outran expectations. It even got mentioned on Slashdot!

Our intro, F – Felix’s workshop, ended up at the 2nd place, after Approximate‘s gorgeous hypno-strawberries, Gaia Machina. The feedback has been very cheerful, during the competition as well as thereafter. Also, as if it was not enough, to our surprise, our previous intro, D – Four, has been nominated for two Scene.org Awards: Most Original Concept and Public Choice. Do I need to state we’re pretty happy with so many good news? :) Thank you all!

Now a week has passed already, we’re back at our daily lives, slowly recovering, and already thinking of what we’re going to do next. :) Until then, here is a capture of our intro:

Every year, we enjoy going to the German demoparty at Easter. It’s always a great party, where we meet our friends again. However, we’ve been invited this year to the Scene.org Awards ceremony in Norway, and it was hard to make a choice between them. We eventually decided to follow Truck’s suggestion and go to both (thanks again Truck, you’ve been extremely helpful). We chose to take ten days of holiday, and visit Norway at the same time (Bergen, Oslo, fjords, etc.). Everything was awesome (and very expensive!).

The Gathering is a good party, it is huge, well organized. There are many compos, seminars, separate area for sceners. Alcohol is not allowed, but there is Easter Garden, a small and cosy place for sceners, next to it. Having both parties is a great idea, as they complement each other. The main problem with The Gathering is that the screen and the sound system are not big enough to cover the whole huge place, so many people (gamers) end up ignoring the compo shows. 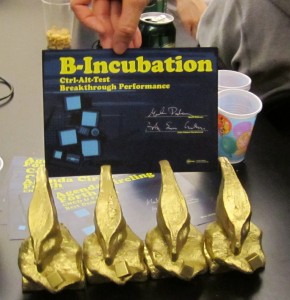 Fairlight statues in front of our nominee certificate.

I’ve been very happy with the Scene.org Award organisation. The team has done a wonderful job, both for the show and the after party, thank you very much for this!

Revision was a great party, with almost the same mood as Breakpoint. Beer was cheap (especially when you come from Norway), organizers were friendly. Revision has been the occasion for Zavie and Cyborg Jeff to release D – Four (ranked 3/11).

Everyone should go to a demoparty at Easter.

We have been taught that B – Incubation was nominated for the Breakthrough Performance category of the Scene.org Awards 2010. Needless to say this was an awesome news, that made our day (and probably the upcoming ones too; being nominated certainly does not mean actually winning the award, but that’s still quite something).

Whoever played a role in this: thank you very much!

As a side note, I’m pretty happy to see that most of the productions I hoped to see being nominated, were nominated. :-)