Here is a sketch made about a month ago, after Cyborg Jeff, our dear composer, let us hear the first elements of his soundtrack. This was the base of our upcoming next production, a 64kB PC intro codenamed E. Our first demo, B – Incubation, have received a positive feedback, but was criticized design wise. E is music driven and focused on the visual experience; I hope it will succeed on the points the previous demo missed.

There is still work to do, but I am pretty confident we will be able to release it at the Ultimate Meeting that will take in Karlsruhe, Germany, starting tomorrow. I do not guaranty the fulfilling of this assertion though, should any supervening circumstances amounting to force majeure. Such circumstances shall include, but shall not be limited to, strike, snow storm, riots, train hitting a truck, hard drive toast, power plug left at home, earthquake, war or acts of God.

See you at tUM! 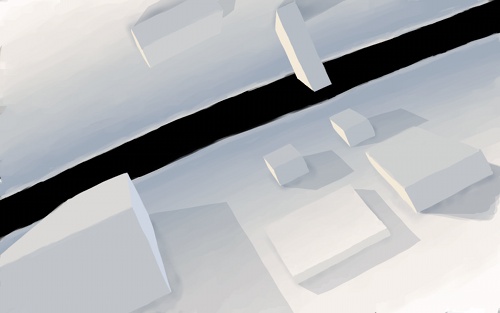 Update: nor the snow and the resulting almost three hours delay on train schedule, nor the very addictive pinball game could prevent the release of E as planned. :-)